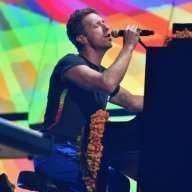 The 'Coldplay has changed' rant

By ARushOfBuckin, September 10, 2016 in Coldplay